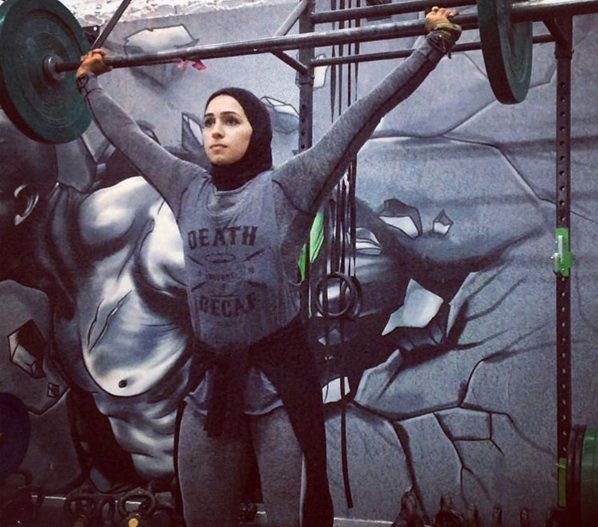 A coach, a competitive athlete, and a mother, Haya Alsharhan helps her husband run and manage CrossFit Q8.

Haya was introduced to CrossFit when she first joined CrossFit Q8 in April 2012 as part of the first group of members at the gym.

Haya didn’t have a background in sports before CrossFit. She kept herself active by putting together her own at-home workouts and she did lots of outdoor running. Before deciding to pursue a career in fitness, Haya had graduated with an Art History degree and worked at Dar al-Athar al-Islamiyyah. She experienced working as an assistant to the head curators at the museum and then worked as part of the education department. At the museum, she had the opportunity to interact with international VIP visitors, tourists, locals, young adults, and children. Through those interactions and experiences she was able to build and develop strong interpersonal skills. Haya has always been passionate about working with people and building relationships. So moving into a career of fitness and coaching felt like a natural transition.

As Haya’s passion for the sport grew, so did her competitive drive. Haya competed in several competitions locally and internationally: the First CrossFit competition and second CrossFit competition organized by CrossFit Q8, The BurnRoom Throwdown in Dubai, and she qualified and competed at the Reebok CrossFit Games Asia Regional 2013, making her the first Kuwaiti and first Arab woman to compete in the individual level at Regionals. She also competed in The Crush Games in Miami in 2014 only 5 months after giving birth to her daughter. Haya also competed and won the Battle of the East (GCC division) in Kuwait in 2015. In 2016, she competed in the scaled division at the Wodapalooza in Miami gaining lots of attention as the first Muslim athlete in a hijab to compete at the festival.

Haya Alsharhan continues to train to get fitter and better each year, and also hopes to inspire other women by sharing her journey. She is constantly trying to better herself as a coach and to continue to help the members at CrossFit Q8 reach their fitness goals.